Are You A Risk-taker?

It has been a while since I posted. Since late last spring, I put my writing aside so I could enjoy the outdoors and spend time traveling.

My grandson’s high school graduation was one of the highlights of that time. I am so proud of him, and it reminded me how quickly the years pass. It seems like only yesterday that he was a baby. He has grown up to be a fine young man.

One of the speakers for commencement was a young pastor I have seen on TBN (Trinity Broadcasting Network) a few times. Although he was speaking to the graduates, his words could also apply to me. Rich Wilkerson is an alumnus of my grandson’s school and well-known. His message to graduates centered on taking a risk even if you fail. The part that caught my attention was the survey he mentioned.  People 95 years old were asked what their biggest regret on life was. They collectively said if they had to do life over they would take more risks. I immediately began to reflect on my own life.

Of course, Rich did bring God into the discussion. Relationship with him means we do ask God for help making decisions. Rich usually speaks to a younger crowd, but if you want to see how he motivates the younger crowd check out this video:

When I had some quiet time, his message kept me thinking. The Bible is full of people who took huge risks in their lives in obedience to God. The two that stand out are Daniel and Esther. Daniel did not conform to the Babylonian diet or bow down to Gods other than the one true God. He risked his life, but he obeyed God.

Queen Esther is my favorite. She was of Jewish birth and married to Persian King Ahasuerus. His grand vizier Haman plotted to kill the Jews. The King had no idea Esther was a Jew. When she found out Haman’s plot, she could not approach the king without being called. Despite that fact, she took a risk and did it anyways. She had to save her people. The King extended his scepter and she did not perish.

The same principles apply today. With God’s help, we can do more than we ever imagined.

Recently, I heard the same message preached from Mark Batterson who has written many outstanding books. I have read his book entitled if and think he makes profound points. With faith, there is hope. God wants to open doors to new possibilities. Age is not a factor. 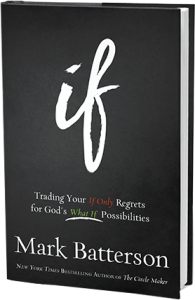 Recently, I enrolled in a new fitness class for seniors. I took a risk because I don’t know anyone there. What I found was a great bunch of people. One woman is 87 years old. She goes to classes four days a week. Yes, many of them have physical issues and a few have had replacement surgeries. They amaze me. There even is a boxing class for people who have Parkinson’s disease.

I have driven past this gym countless times. One day I decided to check it out. We laugh and have fun while improving our strength. It isn’t an easy class either, but it is making us stronger which will improve our health. I am so glad I didn’t put it off any longer.

How about you? Is there something you always talk about doing that you don’t? Is there a trip you’ve wanted to take? Is there a group that you’ve thought about joining and haven’t? The list could go on. Is fear holding you back?

As I have said, many times since beginning this blog, time is precious and passes so quickly. There are so many places to help people in need or to experience something new.

Whether a big or small risk, ask God to reveal a new venture or then provide the courage to do it. What do you have to lose?

I am a retired elementary teacher. I am an avid reader and am pursuing a Christian writing career. My faith and family are extremely important to me. My thoughts on this blog are meant to encourage others in their later years.
View all posts by Linda Buice →
This entry was posted in Faith and tagged Bible, faith, hope, risks, time. Bookmark the permalink.

Navigating the World from a Christian Perspective

On Literacy, Education, and Technology

Because we’re all recovering from something.

Daily Thoughts and Meditations as we journey together with our Lord.

the girl that decided to go for it

A Christian Reflection on Faith , Life, and Nature

The latest news on WordPress.com and the WordPress community.